﻿﻿ INTERACTIVE: Malaysia’s Skewed Sex-ratio, What It Means And What Must Be Done. | MALAYSIAN RESEARCH INSTITUTE ON AGEING (MyAgeing™)

Our Entity
visit us

According to the Statistics Department, the country’s population sex ratio in 1970 stood at 102 males to every 100 females.

The trend, according to Statistics Department, is being driven by the large number of male foreign workers coming to Malaysia as well as higher male birth rates.

A big influx of foreign workers over the past decade accounts for a large part of the shift.

The growth of male population over the years

The data below shows the number of male and female population in the country from 1970 to 2020. 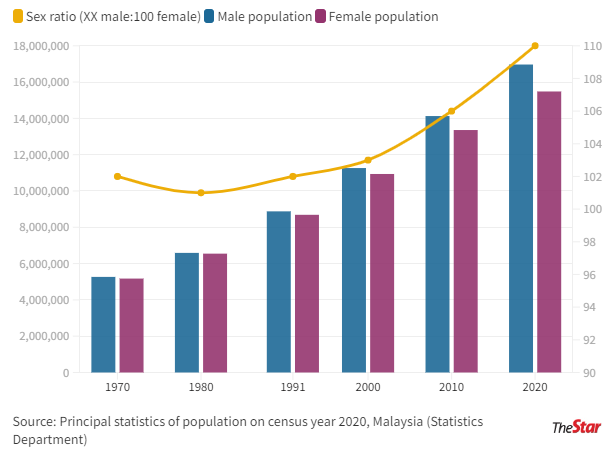 The data below shows the sex ratio of male compared to 100 female (XX male:100 female) by citizenship in 2020. 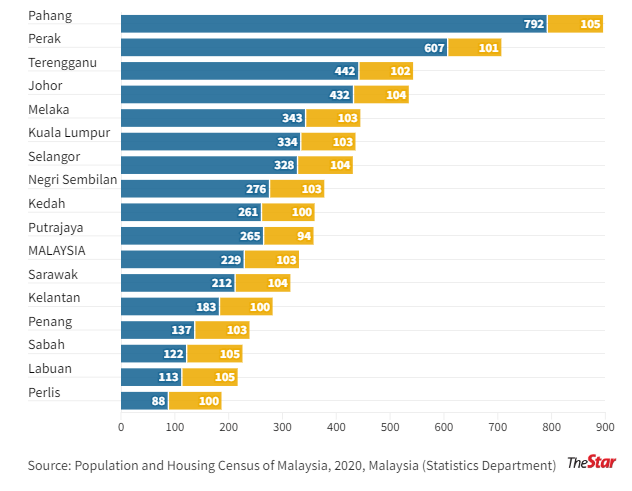 Universiti Putra Malaysia’s Malaysian Research Institute on Ageing (MyAgeing) research officer Chai Sen Tyng said the excess of male births has been widely documented and consistent across populations around the world, with 103 to 107 boys born for every 100 girls.

“But in countries like China and India, the cultural preference for sons and a combination of population policy and use of ultrasound for sex determination have resulted in highly skewed sex ratios.

“The United Nations World Population Database showed that the sex ratio at birth (male births per 100 female births) for China and India in 2020 was 111 and 110 respectively, compared with 106 for Malaysia, Brunei, Philippines and Thailand,” he added. 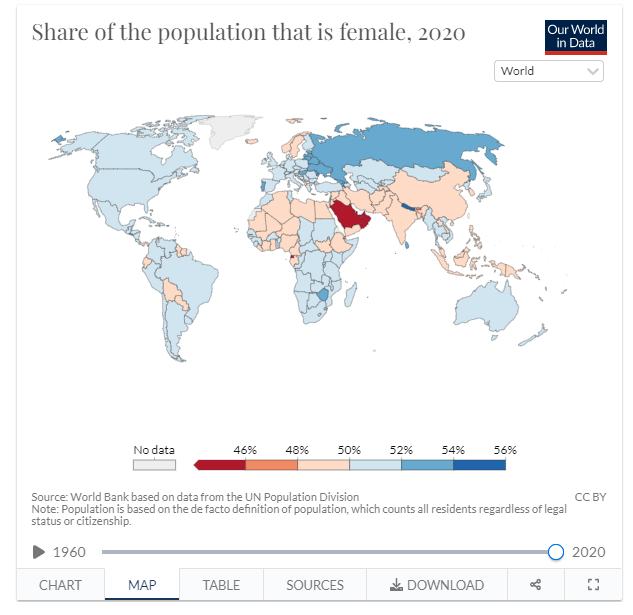 Mohd Uzir said the working-age population, which includes those between 15 and 64 years old, was also dominated by males at 52.9% as compared with women at 47.1%.

“The sex ratio in each state depends largely on the factors of labour force and socioeconomic status. 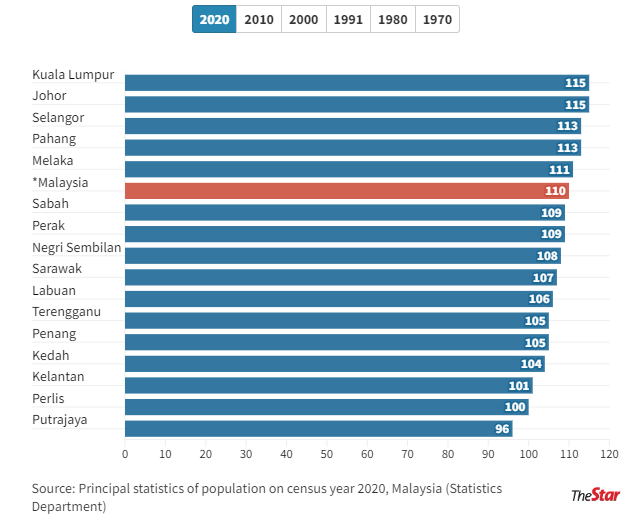 “There are many males working in the construction and agriculture sectors,” he said.

The department’s Labour Force Report showed that males largely dominated industries such as construction, manufacturing and agriculture, especially in states such as Johor, Kuala Lumpur, Pahang, Selangor and Melaka.

Others such as Putrajaya showed a higher female population, as more women work as civil servants.

“From the Labour Force Report, the sex ratio for civil servants in Putrajaya in 2020 was 61 males compared with 100 females,” Mohd Uzir said.

Are most industries male-dominated?

The data below shows the share of employed people by gender and citizenship in different industries in 2020. 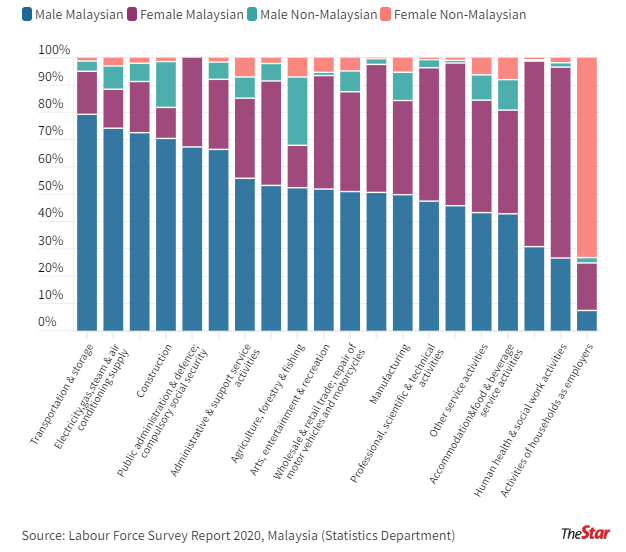 Citing research by Schact, R and Kramer, K titled “Too many men? Too many women? Effects of sex ratio imbalance on marriage and family formation”, Mohd Uzir said having a male-biased population may impact social stability.

“From a socio-demographic perspective, male-biased sex ratios leave many men unable to find a partner and so elevate competition among males, disrupt family formation, and negatively affect social stability,” he said.

“For the same reason, we are also experiencing a brain drain with more educated males and females deciding to work abroad," he added.

He said having more men or women can only be negative if it infringes on the right to equal access to resources and opportunities.

“What we need to work on is improving access for women to quality resources so that they can be more competitive in the face of global challenges,” he said.

“This will continue unless something is done about it,” she said.

She said despite some developments in terms of female empowerment, long-standing macro issues still affect women, including the gender pay gap, the glass ceiling, and pay bias.

What are the employment status of men vs women in the country?

The data below shows the share of employment status by gender. 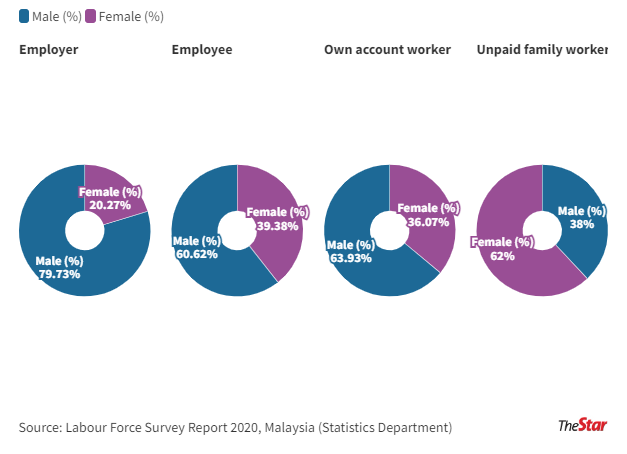 “As such, women have to work even harder to create awareness and make changes to turn things around,” she said.

She added that male-dominated occupations may affect gender relations, gender bias, and gender equity, but this may depend on the level of masculinity expected or normalised in such work sectors.

“Studies have also found that men in male-dominated industries face greater risks of work-related injuries and deaths and higher rates of suicides,” she said.

She said to a larger extent, the workforce and society are still structured around traditional gender roles.

Rahimah said that the entrance of men into female-dominated careers such as nursing and teaching would have enhanced the profession's status and economic value not only through greater diversity and representation, but also through changing how society values such professions.

“Besides that, having male teachers alongside their female counterparts creates a space for students to learn and model after someone they perceive as similar,” she said.

Rahimah said that with the participation of males in the nursing industry, an option can be available for male patients who prefer to be treated by male nurses.

She suggested that the inclusion of men, including foreign workers, in these sectors can also help reduce labour shortages.

“With the greying of the labour force, both male and female-dominated industries would benefit with some level of mechanisation and automation, especially for jobs that involve heavy lifting or monotonous work,” she said.

Addressing the negative impact of a male-dominated workforce requires people willing to champion the cause, open dialogue and a solid evidence base.

“Gender sensitisation programmes should be increased, especially among men,” she said.

Rahimah added that parents need to be educated against perpetuating paternalistic cultural practices and gender role expectations such as a preference for sons to obtain higher education or economic opportunities compared with women who are expected to do care work.

This article was published by The Star on 13 July 2022

INTERACTIVE: Malaysia’s skewed sex-ratio, what it means and what must be done.

INTERACTIVE: More women are delaying marriage. Here's why and why it matters